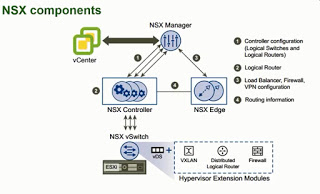 I’m presently working towards the VMware VCP6-NV certification, and as part of the learning process I wanted to setup the NSX on my home lab for some hands on experience. NSX is VMware’s Software Defined Networking product (SDN), that will allow you to build virtual networks on demand across a physical underlying vSphere infrastructure. As shown above, it allows you to create a virtual, segmented environment on demand, without the need of adding or changing any hardware or physical networking to build your networks as required.

The purpose of these posts on NSX is to show how to set it all up on a single ESXi host, and some of the tricks you need to know to make it work that are not covered in the setup guides. The actual standard NSX setup steps that I followed are detailed in VMware NSX for vSphere Introduction and Installation and VMware NSX Cookbook (listed below), so to get a detailed instruction process, please refer to them.

These posts on NSX assume you have done the vSphere6 fundamentals course (or have a good working knowledge of vSphere). Most of the guides around are based on using VMware Workstation (which is fine depending on what hardware you have access to) which I wont try to repeat, but my lab is the following:

I originally built this server since I prefer to have VMs running on a separate machine to the one im working on. It got me through CCIE SP, so its gotta be able to handle NSX right ? Well as usual there are a few tricks to learn.

For reference, the following is the main guides/series I am using for study –

After doing some of the videos and reading the docs, the design in my lab I want to build is the following (including version details) –

Which should then allow me to build an NSX environment and test.

A note on the interface for vCenter – the HTML5 UI is not full featured yet, so some things (e.g. the NSX logical switches menu option – which is kind of key !)  may not work or be present, so use the FLEX client if you find you can’t locate something you thought should be there (get to it via https://[vcentre_ip or DNS]/vsphere-client). The images I have in these posts are from the HTML5 interface.

I setup the vCentre server first, then spun up the ESXi hosts. Just make sure when you create ESXi hosts that you chose OS as OTHER and scroll down to the bottom of the list to select ESXi 6.5 (or whatever ESXi version you are using). You will get a warning that esxi is not supported, but that’s fine as this is not production.

This is where the first tricks became apparent. Whilst I learnt this the long way AFTER installing esxi on to esxi and finding issues later, ill just point them out here to make the process easier. This action of installing esxi on top of esxi is called NESTED ESXi. Once you start doing some google searching on this, you will find some secrets (especially with v6.7).

See below for images of where the options are in the vCentre server new VM setup.

Its also worth looking in to the requirements of the ESXi server hardware required to support the  NSX controllers. This can be accessed via the VMware website HERE, and the relevant content is in this table:

As you can see, each esxi server will need to be able to provide 4 vCPU, 28GB and 4GB ram to each controller to work. After some trial and error I found that I actually needed 10-12 GB of ram on each esxi to then be able to install 1 controller (along with 4vCPU and 40GB+ HDD), so it may be worth making that 12GB and 60GB-80GB depending on how much space you have. The controllers don’t use much in the way of resources once installed:  approx. 2GB RAM and 1-2 vCPUs, but you have to get past the install part first !

Note that the underlying ESXi host will manage the RAM for you so even though you don’t have 36GB (3x 12GB for the 3xESXi VMs), they will install and work fine.

Let the install for the Nested ESXi complete from there complete (and you need 3 hosts for the lab – so create a template and copy or build 2 more VMs the same). It is a good idea to set the management ports to static IPs in your LAN for easy access to the working hosts once they have completed setup (via the DCUI).

In the next post we’ll look at the NSX install and the distributed switch requirements.

One thought on “VMware NSX Lab on ESXi – VCP6-NV Part1”